By John A. Jungerman.

With Atomic Energy Commission (AEC) support, the physics department at UC Davis embarked the development of a precision beta ray spectrometer in 1956. Its purpose was to have a high resolution in order to measure internal conversion electron energies and from them to investigate nuclear energy levels. A solenoid about ten feet long and thirty inches in diameter was constructed with correction coils carefully configured so that the magnetic field over the six-foot helical electron trajectories would be uniform to one part in ten thousand.

In order to assure uniformity of the field, the solenoid was constructed of copper ribbon 1-1/4 inches wide and twenty thousandths of an inch thick wound on edge. A series of some 40 coils each of 120 turns of copper ribbon and epoxy insulation were fabricated in the Physics Department, which was then located in a renovated garage, now the annex to the Department of Art. A commercial firm had failed to produce a satisfactory coil and in the process had used up our 10% extra length of copper ribbon. Through the skill of the Physics Department laboratory mechanician, Ralph Rothrock, a precision jig was constructed and physics faculty and staff successfully wound 50,000 feet of copper ribbon into coils with the requisite mechanical tolerance  and electrical soundness.

The newly-discovered phenomenon of nuclear magnetic resonance was used to measure the magnetic field and to achieve its uniformity to 0.01% by tailoring the field with small additional coils. The beta ray spectrometer was an absolute instrument in that a measurement of the defining slit dimensions for the conversion electrons and the magnetic field determined the electron energy. To assure these characteristics, the earth's magnetic field within the instrument was carefully nullified to less than 1% of its initial value by means of 6th order correction coils that surrounded the spectrometer.

To increase the utility of the spectrometer we planned to introduce a beam from a Van de Graaf accelerator at its source point. We would then be able to precisely measure particle-induced gamma rays via their conversion electrons. I proposed this idea to Professor Earnest Lawrence seeking his support. He thought about it for about 10 seconds and then stated, "Yes, a small cyclotron would be just fine for this purpose." Of course, a cyclotron with its stray magnetic field was not our first choice for an accelerator, but I decided that we would somehow shield the spectrometer from the stray field, and accepted his proposal immediately. Thus the 22-inch cyclotron was born. Professor Ed McMillan remarked at a later occasion that, "Lawrence thought you could do anything with a cyclotron."

The 22 inch was designed within the Department of Physics using the then novel idea of an azimuthal change in the magnetic field giving "sector focusing" for axial stability of the beam. Neal Peek had a major part in designing the magnetic field shape, and Bill Knox designed the electrostatic deflector. We designed the cyclotron to be of variable energy and to produce protons up to 10 million volts with a similar energy for alpha particles. It began operating by 1964 and nuclear measurements began using its beams as a prelude to guiding them to the beta ray spectrometer. Newly-arrived nuclear physicists Paul Brady and Jim Draper participated in this research. To avoid generating stray magnetic fields the cyclotron was housed within a steel box with one-inch thick walls.

Recognizing that the small cyclotron and spectrometer would not be sufficient for our proposed PhD program, I went to Professor Lawrence again in the late 1950's to obtain his support for a larger accelerator. As before, he thought only briefly and then suggested, "Why don't you take the 60 inch?" This was a world-famous machine which had been used to discover many radionuclides which are now commonly used such as iodine-131, sodium-24, phosphorus-32 as well as the elements technecium, astatine, neptunium, and plutonium. It was to be replaced by a modern sector focussing cyclotron, the 88-inch, which is still operating at Lawrence Berkeley National Laboratory (LBNL). Naturally, I accepted his offer and we subsequently sought support from other departments at UCD and generated a proposal for consideration by the AEC to move the 60 inch to Davis. 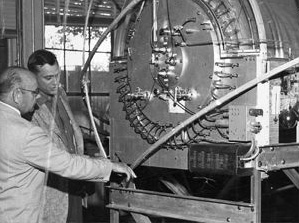 The AEC replied upon review that they would be interested in the proposal provided that we convert the 60 inch to a modern sector-focussing cyclotron which would have increased beam intensity and variable energy. By this time (early 1960's) Professor Lawrence had unfortunately passed away. Yet I believe that his former approval of the transfer to Davis was probably still quite helpful in our securing support from the AEC. Not only that, but in one of his last acts as Chancellor of the Berkeley campus before becoming Chairman of the AEC, Professor Glenn Seaborg authorized the use of a quarter of a million dollars to move the 60 inch magnet and associated equipment to Davis. These monies had been earned through charges for use of the 60 inch and were sequestered in a special fund.

Just after the 22-inch began successful nuclear experiments, the AEC program administrator asked on his yearly visit: "You have a choice. Do you want to continue running the 22 inch or rather the renovated 60-inch cyclotron"? This had an easy answer. The 22 inch quickly became surplus to our program and with it the dream of particle-gamma work with the spectrometer.

The 22-inch cyclotron in still running. I remember cringing with some embarrassment as I watched the Chileans maintaining it with some difficulty within its one-inch steel encasement.

We began research in how best to modify the 60-inch cyclotron to produce a modern sector-focussing accelerator. The magnet of the 60 inch was really 72 inches tapered to 60 inches, so we began studies to produce the maximum energy with a 72 inch magnet. Extensive computer studies of orbit dynamics were conducted under the direction of Paul Brady. The design gave 100 MeV protons, which was very tempting as there were no sector-focussing cyclotrons running at that time with this much energy. In a conference at LBNL with Professor Ed McMillan, Dr. David Judd, chief of the theoretical division there, and Dr. Elmer Kelly, we were able to convince them of the soundness of our design in spite of possible non-linearities which might result because we had used rather extreme values of some of the magnet parameters. At the conclusion of the meeting McMillan advised: "You will be remembered not for the extra energy you're trying to get, but rather for the research that will be done". After considering this admonishment and the risk of pitfalls with our own design, we decided to copy a known design of a 76-inch sector-focussing cyclotron then under construction at Oak Ridge National Laboratory.

The Oak Ridge accelerator has a vertical accelerating region, whereas the 60-inch magnet was designed for a more conventional horizontal one. We decided to re-engineer the Oak Ridge design for a horizontal vacuum tank -- a non-trivial change. We also decided to incorporate an axial ion source, which had been designed for the new Berkeley 88 inch cyclotron. This latter source has a more precise location and permits acceleration of heavy ions or polarized ions much more readily than an ion source that must extend from the vacuum tank wall. So we bored an eight-inch hole in the center of the 60-inch magnet to accommodate the axial source and conducted a series of orbit calculations and magnetic measurements in the central region. This resulted in a central pole tip shape that gave the proper axial magnetic focussing at the beginning of a particle's acceleration. We also added a 2-inch annular steel ring so that the 72-inch magnet became 76 inches in diameter.

Brobeck and Associates helped with the re-engineering, but the Physics Department staff was responsible for assembling the parts and making it a functioning accelerator. In a further bureaucratic complexity, we decided to join with the Naval Research Laboratory in Washington, D.C. in building their cyclotron. It was also a copy of the ORNL design, but with a new magnet. The idea was to save money for the U.S. government by building two cyclotrons together instead of two independently. The collaboration had its benefits, but there were disadvantages. For example, the Navy procured the parts, but had no experience with accelerators. The Navy's submarine service accepted the new dees for our cyclotron. They were woefully out of tolerance and needed to be extensively modified by the Physics Department shop.

The cyclotron was completed in 27 months, which was a rather tight schedule. We produced our first beam just one week before a gala dedication in April, 1966. This was a great relief to all and called for an improptu party late that evening right in the cyclotron bay. A few months earlier, the UCD administration decided that the new cyclotron should be a separate administrative unit to better reflect its utility to the entire campus. The name Crocker was kept in honor of Regent Crocker and to remind us of its 60-inch origin at the Crocker Radiation Laboratory on the Berkeley campus. So Crocker Nuclear Laboratory was created.

The 76-inch cyclotron project was a large one for our small physics department, but it did firmly establish our research in nuclear physics and greatly assisted our fledgling Ph.D. program. Neal Peek designed the shielding. It was arranged so that 30-ton blocks could be lifted off by the overhead crane to access the accelerator or beam lines. It has served the laboratory well. Neal was also Assistant Director of CNL for several years. The beam lines were carefully designed by Jim Draper. They have performed admirably and have provided the flexibility needed for CNL's diverse research program. Paul Brady procured the most advanced electronics to support the gathering and analysis of nuclear data. Bill True headed up the theoretical nuclear physics group to give us inspiration and guidance.

Chancellor Emil Mrak was a fervent supporter. I remember an occasion in Berkeley in 1964 when we were about to lose the 2.3 million dollars from the AEC because the University administration had not yet signed the contract, which would have expired at the end of the fiscal year -- now a weekend away. We were near a pay phone. He said: "Jungerman, do you have a dime?" I guess I did, because he phoned President Wellman and the project was saved. Mrak provided about a half million dollars of university funds to put up part of the building to house the cyclotron. When the NSF administrator came to the campus in response to our proposal, I remember walking over to the half-completed building with him and the Chancellor. "How about NSF providing the other half?" he enquired. And they did. It's probably not done that way any more.